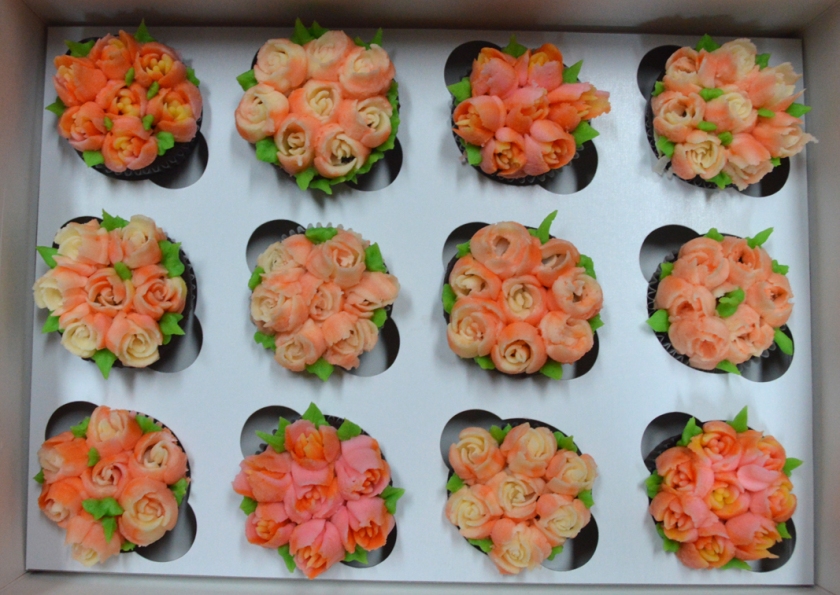 Every year for the past five years, I have donated cupcakes to a good cause: SPCA’s Cupcake Day where all the money raised from cupcake sales goes to help support our local animal shelter.

This year I did floral buttercream cupcakes to remind us that spring is just around the corner and so are all the blooms that follow.

Asked to bring cookies to a cookie exchange several years back, I decided to showcase the fate of those ephemeral snowmen out there…longer days and warmer sun are surely a sign of spring.
So long snowmen. See ya next year!
If you want step-by-step directions on how to make ’em, they’re on my other blog. Click here.

These cupcakes were for Norbi the pilot’s second celebration of his 40th birthday. The first party was a surprise and I made a cake resembling a pilot’s shirt for that one. A week later, on his real birth date, his family celebrated with these cupcakes. Happy days! 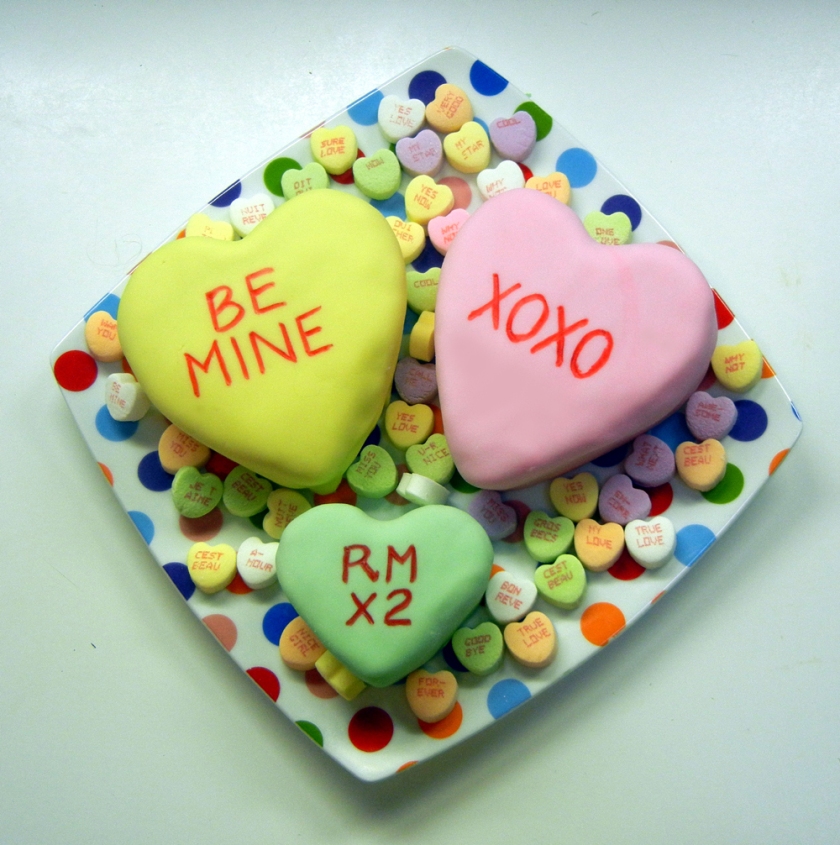 Since there were only two of us for dinner at Valentine’s, I thought this year I’d make a mini-dessert. I usually end up freezing my Valentine’s Day cake and it lasts forever. This year was different!
I cut heart shapes out of a half sheet cake from my largest heart cookie cutter, cut each one in half to make mini-layer cakes, iced ’em and covered ’em with fondant. Each cake had a saying just like the conversation heart candies, so classic this time of year. I kind of like how retro they are.
It was a perfect dessert for us. The mini-mini-heart cake was because I had a teeny bit of extra cake. Since my boyfriend and I share the same initials, I thought it was a fun touch.

Lovely Andi messaged me and asked if I could make a cake for a surprise 40th birthday for her husband Norbert, who is a pilot.
We had lots of backing and forthing. A plane? A globe? Finally we settled on a pilot’s shirt. This one, down to the last detail, included epaulettes, name tag, gold pins, ID tag and even a leaky pen in the left pocket.
I’m hoping that Norbi was on cloud nine celebrating his big four-oh!

My friend Terry is a blues musician who plays once a month at local hangout at an event called “Blues on Tuesday.” When he was turning 60, I was asked to make a cake for him. A guitar, his instrument of choice, seemed like an obvious choice for a cake.
Instead, I thought of all the numbers he cranked out at his monthly gig and my favourite is called “Pass the Peas.” And so the idea for the cake was born. Simplest way was to buy a can of peas, dump it out, scrub it really well, lie it down on the cake and make buttercream peas to seemingly pour out of the can.
Kind of a simple concept but it worked! He loved it!
All I can say to Terry is: Keep passing the peas!
I couldn’t find a recording of Terry performing Pass the Peas, but here’s a fun version of the J.B.’s doing  it. Click here.

Carole and Ken both love carrot cake so their shared birthday cake was carrot with cream cheese frosting. A few buttercream roses are always nice too.
As it happens, February 3rd is National Carrot Cake Day. I guess it’s a consolation day after Feb. 2nd…whether or not the groundhog sees his shadow, we still have six more weeks of winter. At least there’s always carrot cake, right?

My friend asked me to make a seventh birthday cake for her son who loves creepy crawly things (as most seven-year-old boys do).
I thought a cake that looked like a cross-section of a piece of ground dug up, with grass (buttercream), dirt (chocolate cookie crumbs), rocks (candy rocks!) and bugs (gummy worms) would do the trick.
As creepy crawly as it was, it got gobbled up. I bet the worms were the first to go!